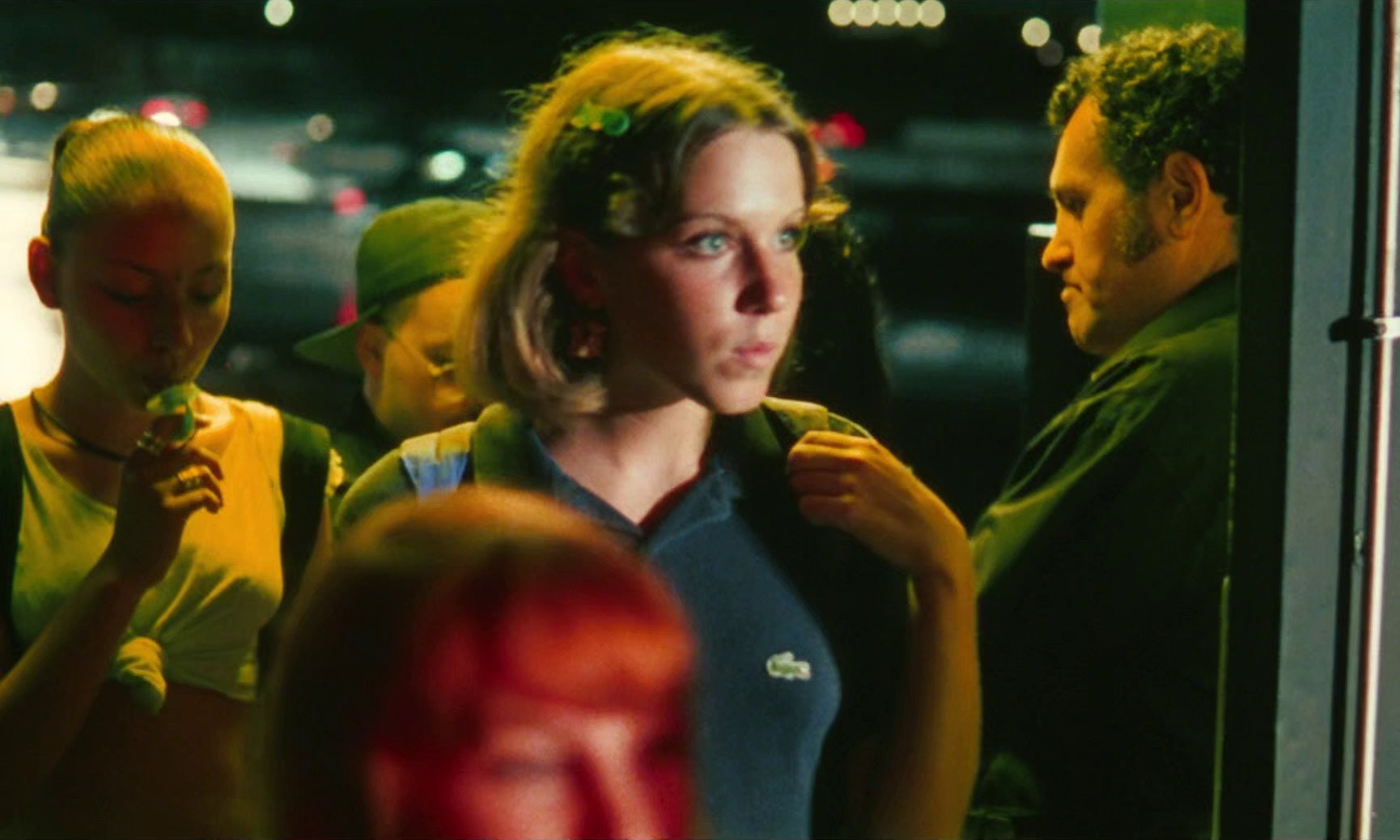 It’s true: ravers preached unity and openness—and practiced extreme exclusivity. Let’s say you had heard of raves, but had never gone, and you wanted to check one out. First, you had to already know where in town to even find rave flyers. Once you had a flyer, you had to know to call the number on it, the night of the party, and then you’d get directions to a checkpoint, where you would have to go to get a map to the event. Sometimes, the kid manning the checkpoint just gave you a second phone number to call, where the promoter would read the directions into the outgoing message. So then you had to find a pay phone, write those directions down or memorize them, and hope you didn’t get lost.

Almost none of my friends drove, and this was before cell phones, so unless that venue was either in or just outside the city, we would have to organize a carpool using pay phones and pagers (which every raver had, luckily). But you couldn’t get called back on a payphone if someone else was using it, and you couldn’t exactly call dibbs on a public phone.

Once you got to the venue, you could still be denied entry. Sometimes, a bouncer would pat you down, and ravers would get bounced for stupid shit like drawing up the cuffs of their UFO pants and trying to smuggle a whole 40 oz in one pant leg. Or, the venue would reach capacity, and your only option was to tailgate, sneak in anyway, or leave.

If you did get in, there was definitely this vibe that everyone is welcome at the rave party—provided that you made it though the gauntlet leading up to it. But this also meant that no one just kind of ended up there. You had to really want to be there, so the secretive nature of rave parties did select for a kind of sincerity, intentionality, and dedication.

Raving was a whole weekend ritual that included calling the number on the flyer, the day after the party, to hear the promoter wax about how great the party turned out and to thank the participants (or to apologize, if it got busted and shut down). This month’s mix opens with a day-after message from Underground Elements’ Southside Chicago, which drew almost a thousand people. I remember dancing to “South Side” at this party, as well as “Chicago Southside“, and it was, indeed, on the South Side, and, it was, as the promoter says on the recording, the BOMB party! 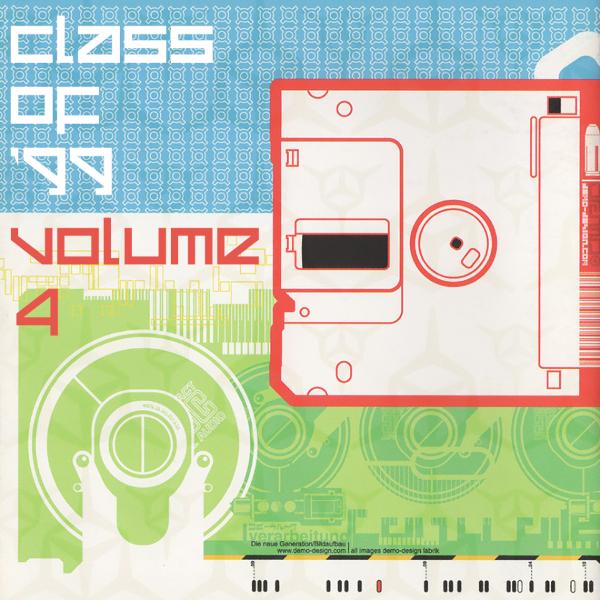 This month’s cover art comes from a flyer designed by Justin Fines, AKA Demo. This guy was the best rave flyer artist in the Midwest, hands-down.

I didn’t have Internet growing up, but we did have a PC at my mom’s house, so I would go to the public library and download web pages to a floppy disk, then load them up at home and edit the source to learn how web pages worked. This strategy helped me land a Web design internship in ’99, and then in 2000 I got my first freelance gig, developing the branding and website for the Chicago DJ Summit (which was cooler when Flash was still supported).

Anyway, I always admired Demo’s vector-heavy style, which inspired my work early on in my career. 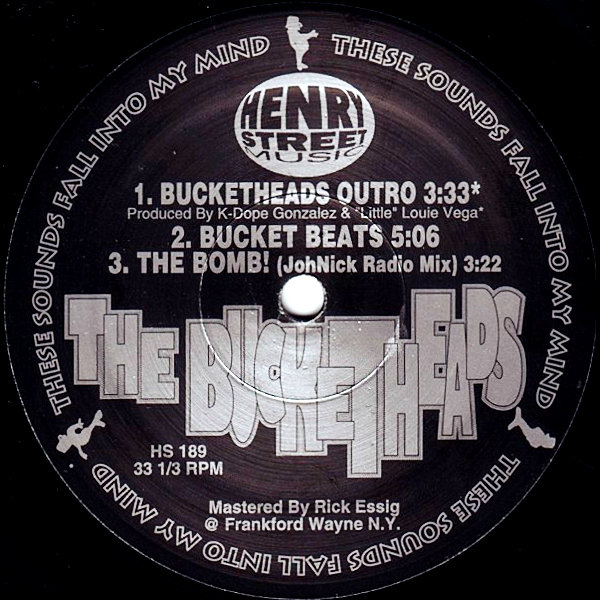 This month’s intro is the Bucketheads Outro, the A-side to a vinyl single with a much more famous B-side, aptly named “The BOMB!” We un-ironically described things as “the BOMB” back in the Nineties, including parties, mixtapes, records, flyer art, kickflips, M-80s, or even a falafel sandwich. If you ask me, The Bucketheads’ entire LP was the BOMB, and worth owning.

“Bucketheads Outro” samples a gay anthem called “I Was Born This Way” by Carl Bean, which is available on the Jumpin’ 2 compilation. 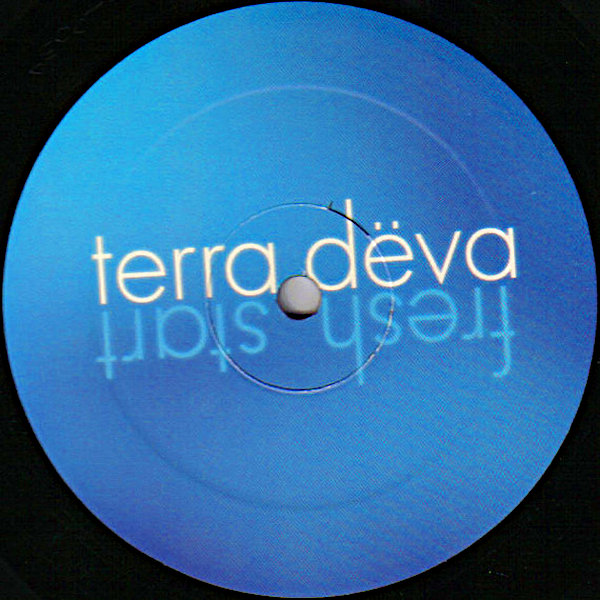 Classic track from Mouseketeer-turned-Dëva, Terra McNair, remixed by Chicago’s Joshua Iz. I don’t know any of the samples used on this remix, but as always, if you know, please let me know in the comments. This one is cheap and available on Discogs. 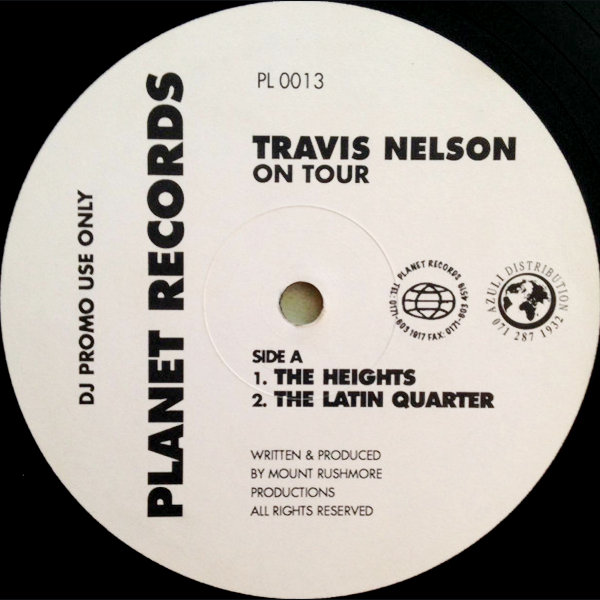 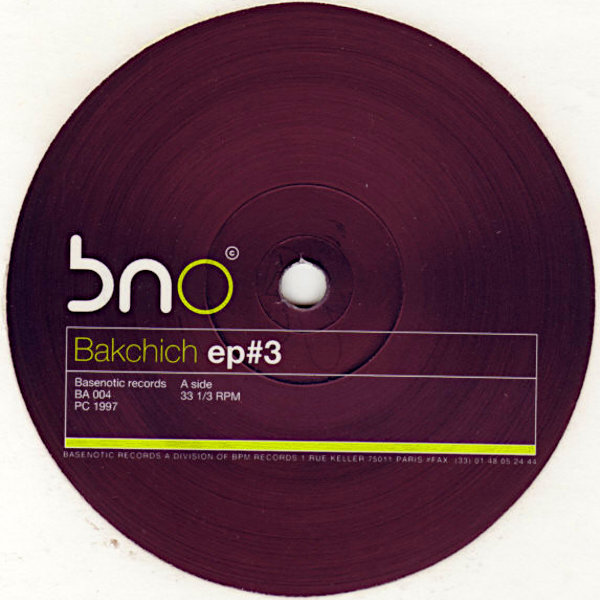 This tune is very near to my heart. My best friend owned Bakchich #3 before I did. I remember hanging out by the decks in his bedroom, at his mom’s basement apartment in Rogers Park. He put this on as I stared out at Lake Michigan from his window, the electric guitar part (from Tango Hustle) seemed to go on forever, and then when the beat dropped we danced all around his room and he told me that he knew ’97 was going to be a great year. And he was right, it was.

“Tango Hustle” is available on the Kay Gees’ Kilowatt LP. 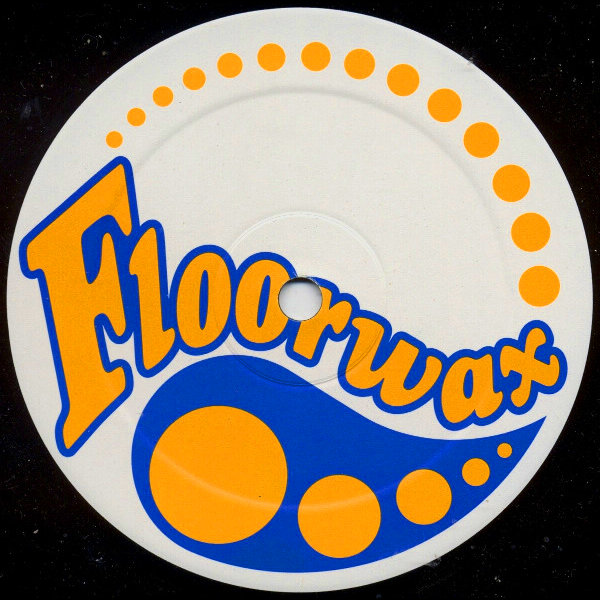 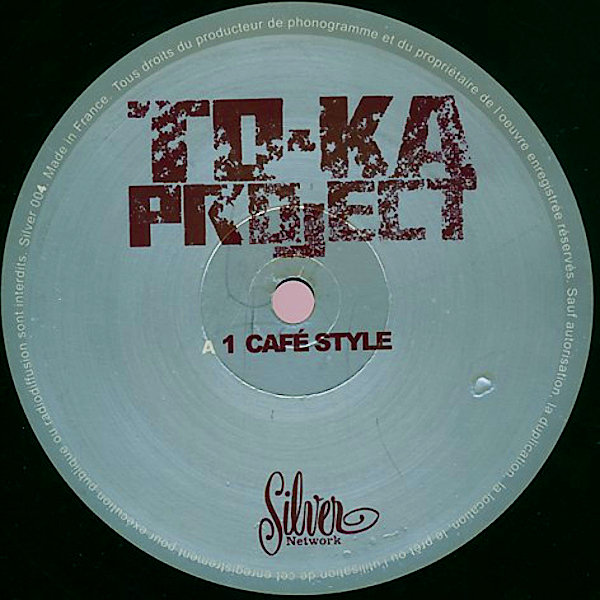 “Café Style” Samples “It Happens Everyday” by The Crusaders, which is on the album <A href=”https://www.discogs.com/sell/list?master_id=47534&ev=mb&currency=USD” target-“_blank”>Free As The Wind. It also samples “Emotions” by Mariah Carey, from the album of the same name. 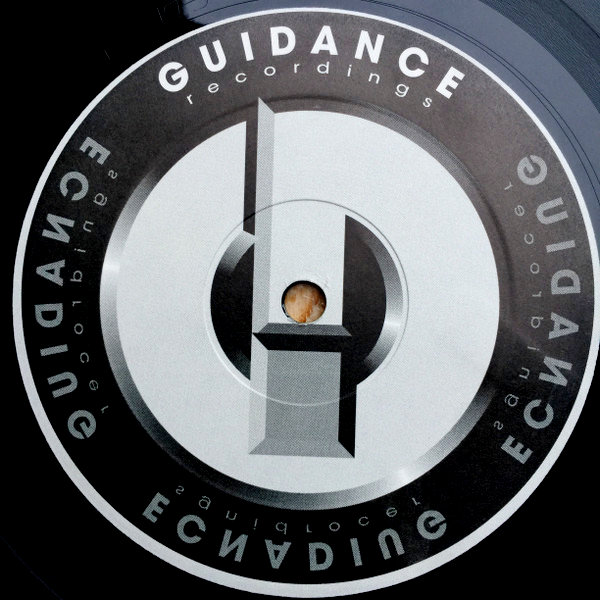 This is Iz again, under the pseudonym Free Energy. I’ve spun this EP already, and I will again before this series is through. 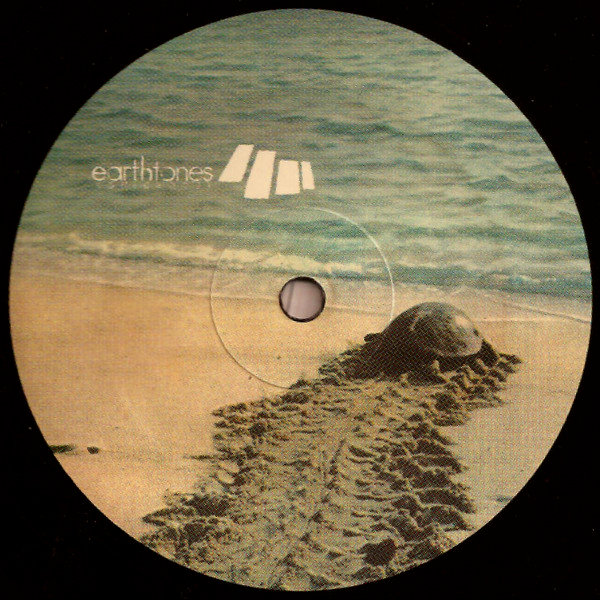 I’ve also spun this LP already, and I’ll be pulling cuts from it as this series goes on. 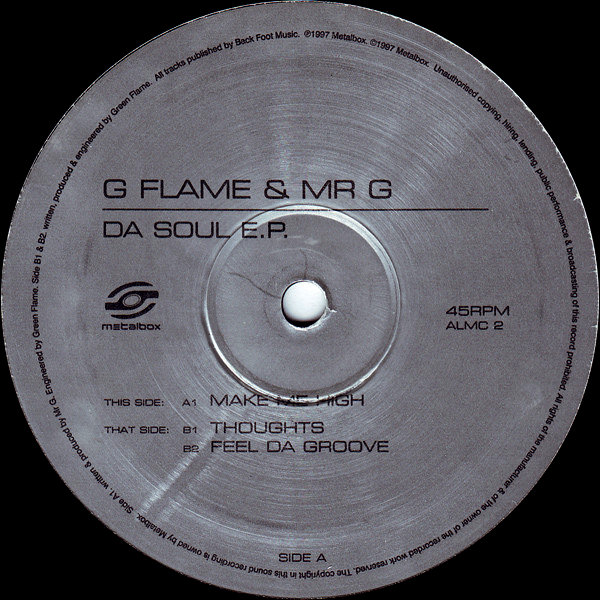 Yet another record my best friend, Matt, owned before I did. Matt had dual British citizenship, and his sister lived in London, so he would get these imports before anyone in Chicago had even heard of them. “Make Me High” was associated with the odious “Speed Garage” subgenre, which Matt insisted was dope and about to blow up. Speed Garage did blew up, especially in England, but it was a horrible subgenre that I hated, and still do. This tune isn’t very Speed Garage-y, though, so I don’t know why it was featured on Speed Garage Classics, or how it could have already been a “classic” when it just came out.

This track samples “Dance With Me” by Peter Brown, available on Discogs. 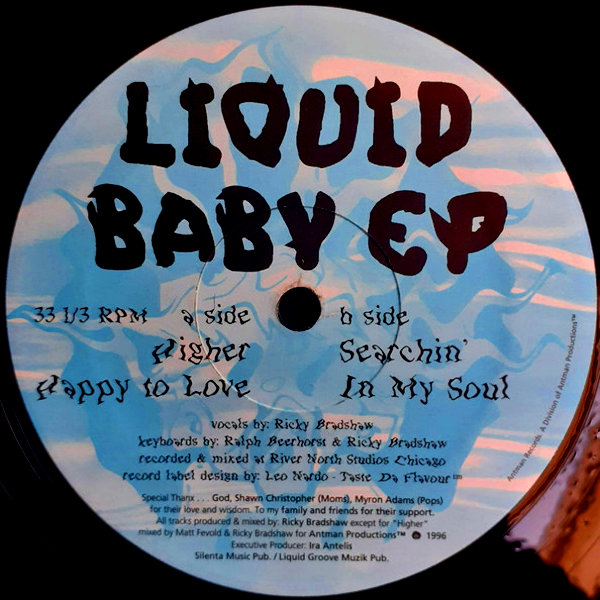 The Liquid Baby EP was impossible to find back in the day, so I only owned the remix of “Higher” from the Jump? Skip! EP. This EP is more attainable now, through. 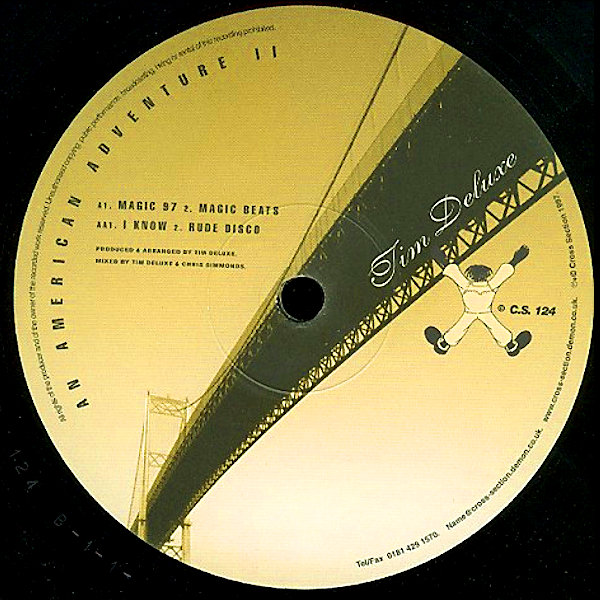 When I owned this on vinyl, it was part of Mark Farina’s highly-recommended Frisko Disko compilation.

“I Know” samples “Shine On” by Incognito, which you can buy on Discogs. 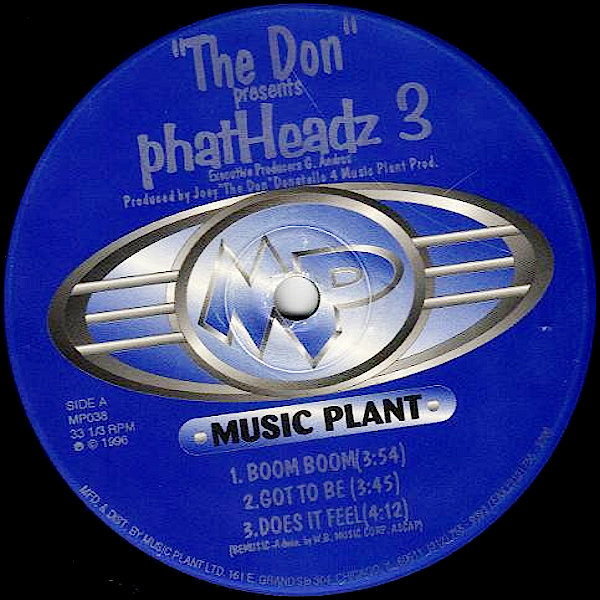 This was the hardest record to track down in this whole series. It took me 25 years to ID this record, from Music Plant’s PhatHeadz 3. I had it on a mixtape called “Let Yourself Go” by DJ Mark Almaria, and I could never identify it. A couple years ago, I went to Gramaphone Records and asked everyone in the store if they knew. They ended up emailing Karl Almaria, Mark’s brother, but he didn’t know. I knew that it sampled “Goin’ Up In Smoke” by Eddie Hendricks, and “You Ain’t Really Down” by Status IV, but that’s all I knew.

Then I started stalking Mark on Mixcloud, but I couldn’t get him to respond there. I asked in YouTube comments, on message boards, but no one had a clue.

Finally, my good friend Mike told me that his DJ buddy was close friends with Mr. Almaria, so he was able to pester his friend to lean on Mark, who finally came up with the title. This was an 11th-hour insertion into this set list, shoehorned in at the last minute, but hopefully it doesn’t sound like it.

Discogs has “Goin’ Up In Smoke”, as well as “You Ain’t Really Down”. 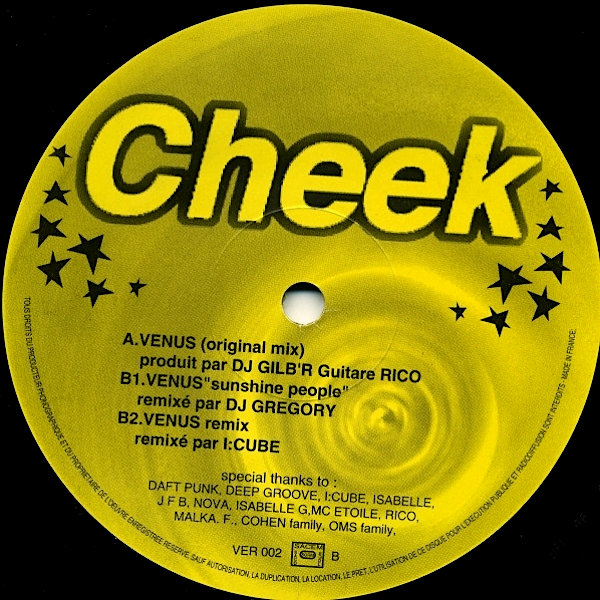 “Cheek” was a one-off moniker for DJ Gilb’R, who ran Versatile records in Paris. This remix by DJ Gregory, AKA Cheesy D, was a huge hit in the Chicago scene. Apparently there was a music video for “Sunshine People”, and like a lot of these French Touch records, the video seems like it took more effort to produce than the record probably did. Not that it’s particularly high-budget, but stop-motion claymation is hard as hell. Sampling Brass Construction, probably less so. 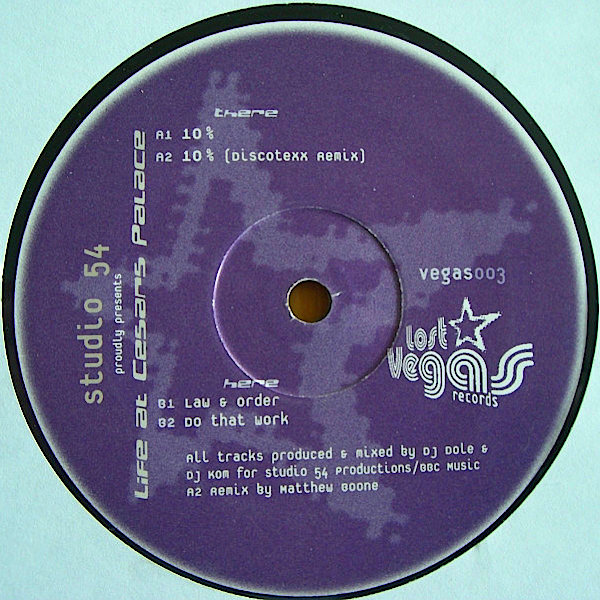 Studio 54 put out a lot of decent dancefloor filler, like the fairly minimal “Do That Work”, from the Life At Cesars Palace EP.

That Kleer LP I linked earlier will get you the sample source for this record, called “Keep Your Body Workin”. 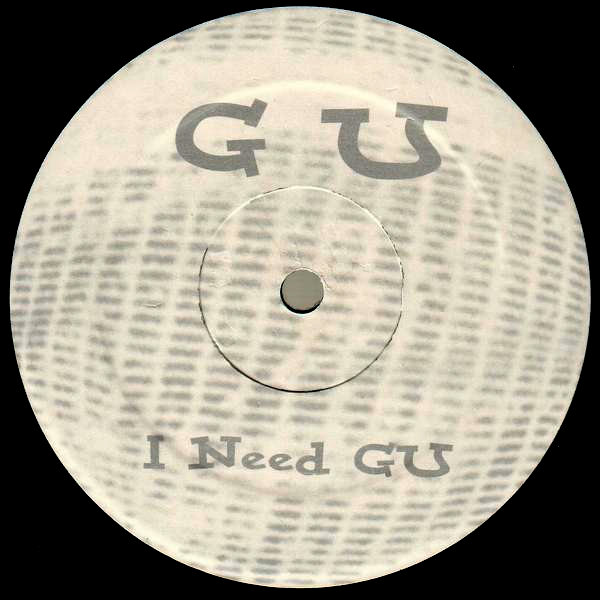 Mark Almaria was considered one of the two biggest House DJs in Chicago’s mid-90s rave scene. The other big name was Justin Long, and there was much debate within the scene over who was the better DJ.

Mark worked at Hip House, way out at the Brickyard Mall, and Justin worked at Gramaphone. My friend Mike and I were squarely in the Mark Almaria camp, but Hip House was a lot harder to get to than Gramaphone, so we chose to put up with Justin Long, who we disliked for no rational reason. I remember Mike went into the store one day and I asked him if they had a copy of “I Need G.U.” Justin corrected Mike and insisted the record was pronounced “I Need Goo” and for some reason this irritated us so much that we got into an altercation with him and then left the record store. 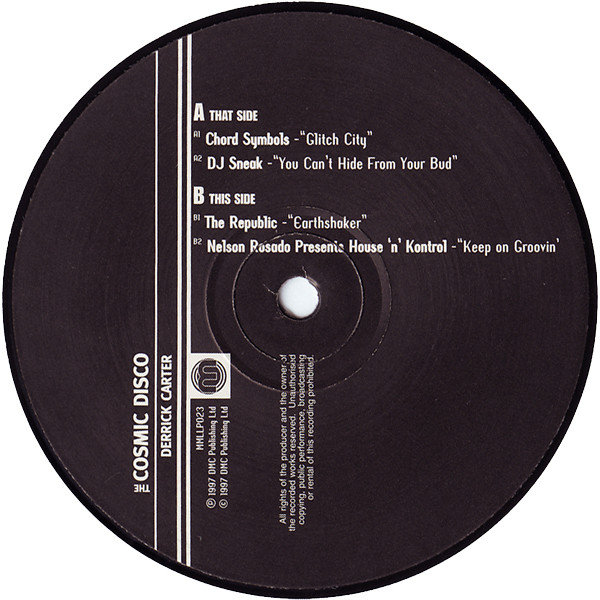 I was at an outdoor rave in the middle of the day when I first heard this record. Sometimes, promoters would rent out a whole campground somewhere and have these campout raves that lasted all weekend. There was one recurring event called Even Further, which was apparently still going strong, up until a couple years ago.

I heard this record, and the next record, while dancing under a gazebo during a Mark Almaria set.

“Earthshaker” samples <a href=”https://www.youtube.com/watch?v=HMNzPBJLtjM&t=44s” target=_blank”>”Earthquake” by Al Wilson, from Count The Days. You’ll get the most bang-for-your-buck if you buy “Earthshaker” as part of Derrick Carter’s Cosmic Disco compilation. 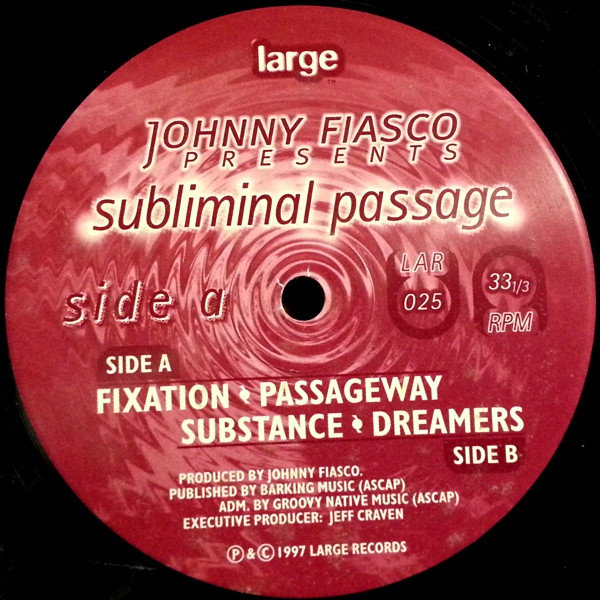 Like I mentioned, I first heard this the same time I heard “Earthshaker”, under that gazebo at that party—though I don’t think I heard them in the same, consecutive order. Hopefully I’m not ripping off Mark Almaria’s DJ set, unintentionally.

I don’t know what this groove from Subliminal Passage samples, so let me know if you do. 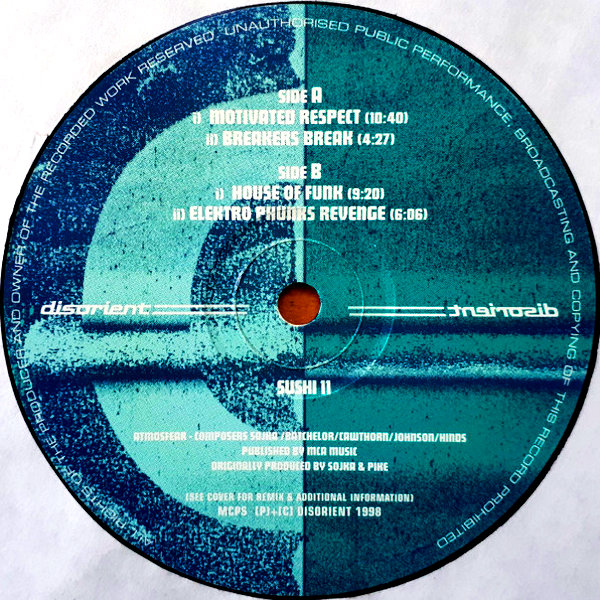 Atmosfear were an early-80s Jazz-Funk band who made a comeback in the 90s as an electronica crossover act. They put out an album of new material, and an album called Altered States that remixed their old material. This one was reworked by Dimitri From Paris.